Easter is approaching and that means hot cross buns are on all the shelves. I am always disappointed with shop bought hot cross buns, apart from the fact that they are packaged in single use plastic, they are also nowhere near as tasty as this homemade version. Although this is a bit of effort the end result is well worth it. I ended up doing these over most of a day to make sure there was plenty of time for the buns to rise. Almost as soon as they came out of the oven, Rob walked in the front door and promptly ate one, they are just too tasty to resist.

To glaze
75g apricot jam for the glaze

Recipe
Put the flour into a bowl. Add the salt and sugar to one side and the yeast to the other side of the bowl. Add the butter, eggs, milk and half the water and turn around with your fingers. Continue to add the water and gather the dough together.

Put the dough into a lightly oiled large bowl. Cover with a tea towel and leave to rise until at least doubled in size (this could take up to 3 hours).

Tip the risen dough onto a lightly floured surface and scatter the fruit and cinnamon on top. It may seem daunting the idea of kneading this mess of fruit but I promise you, if you persevere, eventually all the fruit will be incorporated. Cover and leave to rise for a further couple of hours. 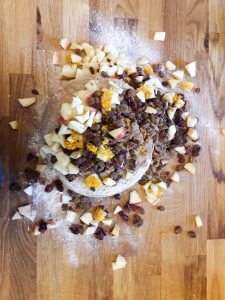 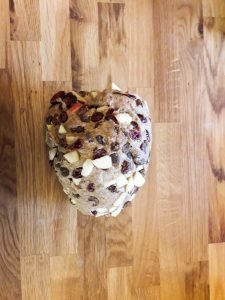 Fold the dough inwards repeatedly until all the air is knocked out. Divide into 12 pieces and roll into balls. Place on a baking tray lined with reusable baking paper.

Cover for another hour or so to rise until the dough has at least doubled in size (at least a couple of hours). Meanwhile heat the oven to 200 degrees. For the crosses, mix the flour and water to a paste. Pipe a cross onto the buns. Bake the buns for 20 minutes or until golden brown. Warm the jam with a splash of water and brush over the tops of the buns to glaze. Cool on a wire rack.

Sign up for our newsletter here for Zero Waste news!

We use cookies to ensure that we give you the best experience on our website. If you continue to use this site we will assume that you are happy with it.Ok